NLP Coaching What Is NLP

Molenaar’s giving back to the sport she loves

We are proud to deliver to you a very special article this week. Our exceptionally brilliant graduate and coach Emma Molenaar had the utmost privilege of being interviewed by The Women’s Game. Emma has provided an insight into her approach to NLP in her everyday life and attitude to sportsmanship, and what principles she has applied within the realms of NLP when coaching her fellow teammates. We are so very proud of Emma, and look forward to seeing her shine brightly like the star that she is.

Emma Molenaar represented her native Netherlands in basketball at junior level before giving rowing a try as a seasoned 25-year-old-athlete.

Molenaar had earlier moved to Australia and was dabbling in basketball, but felt she needed a new challenge.

After watching the Dutch women “absolutely storm to the finish line from three quarters of a length behind” to win a silver medal in the women’s VIII at the 2008 Beijing Olympics, the excited Molenaar was hooked and rowing became the former basketballer’s sport.

“Someone introduced me to Ellen Randall, amazing coach, and she gave me a couple of pointers and invited me to come to UTS and I did, absolutely loved it, great crew, great coach of course.

“What started out as a bit of a hobby, something to do, transformed into something more serious and it kinda morphed into an obsession really, in a healthy way,” she said.

Rowing taught the effervescent Molenaar she was “capable of much more” than she had originally thought, including the life lessons she learnt from her mentor in coach Randall, which she’s now passing onto her junior charges across a variety of sports. 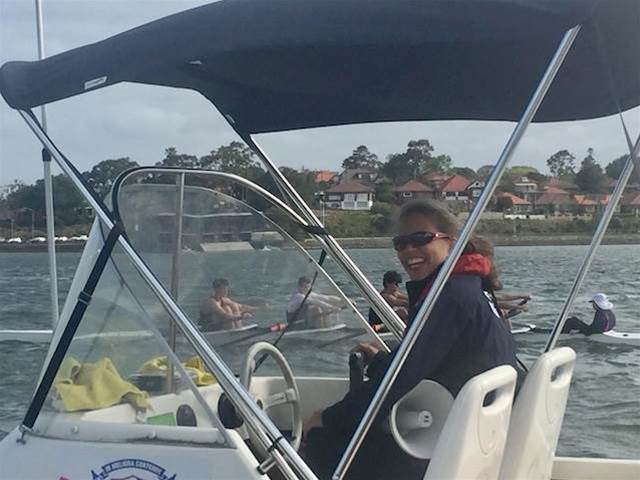 Molenaar, who once received an invitation “to take part in the selection process for the national team”, is the only female rowing coach at Joeys at present, but she isn’t the first, as that honour went to former Olympian – Sarah Cook’s footsteps.

Some of the invaluable skills she uses with her physiotherapy clients, ie kinesiology, Neuro Linguistic Programming (NLP) and personal development -mind and body – have aided her clients in a more efficient recovery.

Molenaar applied the same principles to her rowing squad and once they’re aware of this holistic approach, she says they’re more consistent with their performances.

“I want them to think beyond themselves, so basically you row for the person who’s either in front or behind you.

“It’s not so much about winning, if you give your 100 per cent, whatever that is, that is all I can ask, regardless of where you place, if you do that, then you’ve won,”

They’re the lessons and experiences the high achieving Molenaar took from high performance rowing and she’s now passing onto her young squad.

Molenaar relayed how Carlos Petty’s parents Brad and Cecilia have seen a positive change in Carlos including increased focus, determination and he’s been having fun since he took up rowing.

Charlie Hine’s also thrived under the former UTS rower’s coaching and mentioned “he’s keen as” and despite his tender years, she said he has healthy dreams of rowing in the First VIII in a few years time and possibly for Australia one day. Her job is to help him in the now, but also give him the skills to have every opportunity in achieving those aspirations one day.

Both Hine and Petty witnessed one of their 1983 classmates in Tony Daly rise from a chubby kid to world class sportsman, albeit, in another sport – rugby.

Daly played 41 tests for Australia and he was a World Cup Wallaby in 1991, so they’re well aware what Joeys can do for any boy who has the drive to succeed like Daly did.

Her squad competed last Saturday at their first-ever regatta and backing up her mantra of mind and body, she reminded her squad throughout last week, that their being “nervous and excited are the same thing physiologically, ie your heart rate goes up and you feel a bit funny in your stomach and body,’ she said.

With the nerves of their first regatta behind them and their competition sized up, Molenaar has become aware that a number of the crews are so determined to succeed: they have decided to motivate each other to do extra training, outside of the scheduled sessions in order to achieve their goals and be future champions.

Original article was published on The Woman’s Game (TWG)

Go Emma!!! Proud of you and your achievements!!!

Congratulations Emma, It’s always inspirational to be around you, the passion you show for encouraging other to be the best versions of themselves radiates from every cell in your body. Keep up the great work.

That’s brilliant Emma, always an inspiration and a great mentor for students

Hey Emma, that’s fantastic – this is the way to make positive ripples of change in the world 🙂

That is so fantastic. Huge congrats to you.

Congratulation Emma! You are the super star! 🙂