WHO IS THE TAD JAMES CO.? 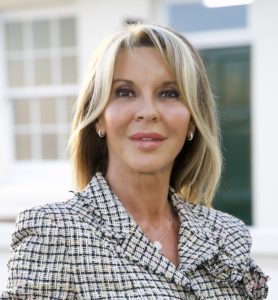 Dr. Adriana James is a Certified Master Trainer of NLP, developer of the NLP Coaching Trainers Training, and author of “Values and The Evolution of Consciousness” and Time Line Therapy® Made Easy”. Adriana has earned international recognition in more than one field of endeavor.

Adriana James was a highly successful concert violinist and won numerous international awards as well as serving as Concert Master at the prestigious Sydney Opera Company. Adriana began her music career at the early age of 5 years old when she won her first competition in her native country of Romania.

This young prodigy was so gifted that even though Romania was a Soviet country she was allowed to travel all over the globe to World Class competitions and won 19 top European awards.

In 1994 she was awarded “Woman of the Year”, by The American Biographical Institute for her achievements and her Leadership ability.

Now, How does Adriana James Sound?

from our Australia FREE INTRO CD, listen to students’ testimonials and a radio interview with Tad and Adriana James. This is a Condensed Version of the original interview.

from The Secret of Creating Your Future® CD Set: “What to Do — Making Change and Commitment” with Adriana and Tad James. To Order the Complete CD Set Click HERE

from The Secret of Creating Your Future® CD Set: “Making a Difference on the Planet” with Adriana and Tad James. To Order the Complete CD Set Click HERE

from the NEW NLP Master Practitioner CD Collection: “How to do an Arm Catalepsy Induction” with Tad and Adriana James (The product is scheduled for release in the first quarter of 2006.To Order the Complete CD Set Click HERE)

SPECIAL PREVIEW: Recorded Live and Not Yet Released … from the NLP Trainer’s Training: “Intro to How Do Successful NLP Demonstrations” with Tad and Adriana James (The product is scheduled for release in the last quarter of 2006.)

Video Clip: Tad does a demonstration of a phobia cure on the Kerry Ann Show on National TV in Australia.Click Here